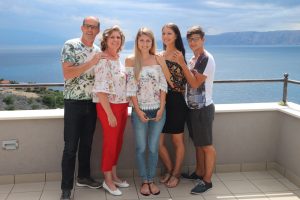 We are Marien and Yvonne Kroon, and live with our three children Milou, Lisanne and Frans, in Floresți, a village nearby Cluj-Napoca, a city in the center of Transylvania, in Romania.

How it all started / the beginning

In 2000, we left our comfortable life in Waddinxveen, to live and work in Romania. We were originally sent out by the Christian Church Bethel boskoop
www.bethel-boskoop.nl

The first 4-1/2 years, we worked with an American organization in Cluj-Napoca. We learned a lot from them, but came to a place where we felt it was time to take the step of starting an organization on our own.

In 2005, we started work in our neighborhood in Floresți. As we moved forward with the work, searching for new ways to serve the community, we were contacted by someone in Holland, from a school called Katapult that trains people to work with children and teenagers, established by Herman Boon Ministries. http://dekatapult.nl, They asked if they could come over for some outreach with us. We were surprised as, at this point, we hadn’t done any work with children in our residence or care work. We first tried to stress to Herman that we were not working with the children, but he convinced us that they really felt led to visit us anyway.

So, that’s how the “party” started! We rented a Roma gypsy church in Floresți, and with the outreach group from Katapult, we had about 180 children on our third day of the program (the village has a population of about 2000)!
After Herman and the students returned to Holland, we decided to continue with the weekly children’s program and currently we have about 40 children still attending.

As we worked with the Roma Gypsy children, we learned that many don’t finish school. We also saw struggles in their family lives with alcohol, poverty, aggression, substandard housing and social problems. To get the most basic job, you must attend school for at least 8 years and without those years, the chance of getting any job is quite low! These children were facing almost impossible odds of achieving 8 years of education. Some children don’t have birth certificates and without one, they don’t exist, according to the government, so aren’t even allowed to attend school!

We received the vision to start an after-school care program, to provide classes for extra help with homework, where the children could feel safe, nurtured and have the freedom to be a child. We had no experience in setting up this type of educational support, but provision came in miraculous ways. In the name of our foundation, we purchased a house in the autumn of 2005, and after 6 months of refurbishing, were able to open our doors to the first 30 children who had signed up. We named the house Casa Speranta which means “House of Hope” and has now grown to about 45! Along with a good meal and help with education, we also offer encouragement and love to these children.

And after just one year of the children participating in our program, we saw lots of positive change. We saw this change, not only in the area of educational achievements, but also in their personalities and overall well-being. Love is the basis of everything we do at Foundation Charis, especially our projects. In addition to the after-school care program, we have an educational program for mothers every Monday. We help mothers learn how to raise healthy children, in the areas of hygiene and use of medication. Then on Wednesdays there is a women’s program for worship and Bible study. On Friday there is a children’s program and after that we have a program for the teenagers. On Sundays we have a service in the church with about 60 people attending each week.

While we’ve seen miracles, in terms of the foundation and setting up these programs, the most beautiful evidence is to see such changes in the hearts of the children and their parents! To have them trust us and know that the work is meaningful, makes us quite thankful and encourages us to continue.